The Lascaris Palace exposed a temporary exhibition about the Art parties. This Palace has been built in the 17th century and was the house of the Vintimille - Lascaris family until 1802. Left in the biginningof the 20th century it has been bought by the city of Nice in 1942. The city has rehabilitated this palace between 1963 and 1970 and has put inside a collection of old musical instruments.

The exhibition is in the ground level and the first floor. It traces the history of the Art parties (in french les fêtes d'art) who have happened during the twenties at the Ruhl hotel. These paties have impressed the people with their magnificence. The organizers inspired themselves by the Quat'z'Arts dance (the dance of the art students). Between 1892 and 1966 the students should create their own clothes in the respect and the taste of a determinated period. After they put their clothes and walked towards the streets of Paris. The creation of the clothes and the party is supervised by a committee in which Paul Tissier belonged. Tissier was a watercolorist and have great knowledges in history. His aim is to give much more importance to the architects in the building of houses.

His wedding in 1915 with the stylist and musician Gisèle Grandpierre precipitates the events. Gisèle was one of the four daughters of a businessman who produce materials made with bronze and develops electrical installations. Her money and her relationships help Paul to carry the Quat'z'Arts spirit to the french riviera. Paul created the Art parties. These parties happen in the old Ruhl hotel near the casino of the Jetée - Promenade. Gisèle Grandpierre and the set of one of the Art parties.

The Ruhl hotel was very luxurious with a big dining room, many bars and some balconies. Pau invents a precise screenplay and will apply it to all of the parties. He chooses a theme or an historical period (desert, childhood, sport, ...) and asks to the director of the palace to adapt the place in the respect of his choice. Then he sends invitations to the people he has chosen and ask them to put clothes in harmony with the theme.

During the parties an orchestra is playing. Here again Paul Tissier respect the tradition of the Quat'z'Arts dance. Since 1892 an ochestra plays several kinds of music. Tissier really like music and he creates in 1909 the musical association of the Fine - Arts composed by professionals and amators. 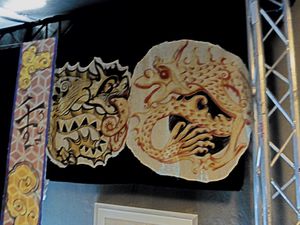 Paul and Gisèle Tissier wanted to use art for fighting against the weariness and the vulgarity. They have succeeded but after the death of Paul in 1926 everything was stopped. Gisèle will buy the villa Beau Site near the Mont Boron and will compose four hundred musical partitions. She will buy many musical instruments for creating a collection of instruments to the 18th century until the 20th century. In 1988 she gives by will all her instruments to the Institut of France. Now these instruments are in the Lascaris Palace. Musical instruments of the Lascaris collection. The Palais Lascaris is a seventeenth-century aristocratic building in Nice, today a musical instrument museum. Located in the old town of Nice, it houses a collection of over 500 instruments, which