The exhibition at the Massena Museum about the art work of Charlotte Salomon showcases us the art work of an unknown artist in France. This artist begins to be much more known since the publishing of the David Foenkinos book entitled "Charlotte" in 2014. Charlotte borns the 16th of april 1917 in a german jew family. His father works as a teacher at the Humboldt University of Berlin. At the age of 10 she is confronted to a malediction about the women of the family. Her mother kills herself like the other women before her. The Charlotte's father meets an opera singer Paula Lindberg known as Paulinka and get married with her but the relationships between Charlotte and her mother - in - law aren't good.

In 1933 Charlotte integrates the Academy of Fine - Arts in Berlin with the aim to become an artist. For Charlotte the art helps to express her own sensibility because she is a shy person who loves music. This love for the music is present inside all the gouaches she has painted. When the nazis take the power in january 1933 the future becomes to be bad for Charlotte. The Berlin Academy of Fine Arts refuses to give her the first prize because she is a jew and her father lost his job. After losing his job her father is also enjailed few months inside the Sachenhausen camp. Painting of Charlotte who represents the cristal night (1938).

The Charlotte family begin to escape outside the Germany at the beginning of the 1930's for going to the french riviera (Villefranche - sur -mer). This escaping becomes to be more higher after the tragedy of the cristal night the 9th november of 1938. After a killing of a german diplomat the nazis burn some synaguoges and organize some pogroms. Charlotte rejoins the France and succeed to find a safety place inside the house of the american citizen Ottilie Moore. At this time the french riviera was a safety place for all the european jews. Charlotte discovers the garden of Ottilie Moore and decides to do paintings for escaping of his daily life. Charlotte also improves big love feelings for Alfred. She draws and paints some gouaches about him and when he will discover these gouaches in 1961 he will be very touched. When the second world war is triggered Charlotte follows her grand father who is enjailed inside the camp of Gurs (France). Few months after she comes back to the french riviera with her grand father but her friend Ottilie Moore who is an american citizen begins to go back to the USA. The Charlotte paintings show us the feelings she improves at this time. She understand that she must work in the emergency. In 1942 the nazis troups invide the french free area but the italian troups continue to occupy the french riviera. The italians aren't against the jews and the jews aren't persecuted by the italian army. Charlotte gets married in june 1943 with Alexander Nagler and stays with him in a small flat near the station of Nice.

The 8th of september 1943 the italian army evacuate the city of Nice after signing the armistice with the allies forces. Charlotte gives all her gouaches dedicate to her friend Ottilie Moore to the doctor Moridis for protecting them. Just after the evacuation the nazis troups invide the city of Nice and persecute the jews. Charlotte and her husband are arrested in september 1943 and bring to the Excelsior hotel the headquater of the gestapo. The both would be deported and killed by the nazis (Charlotte the 7th october 1943 and Alexander the 1rst january 1944) inside the Auschwitz concentration camp. At the end of the war the doctor Moriodis gives all the gouaches to Ottilie Moore. She will give them to the Charlotte's parents. Very moved the Charlotte's parents will give all the gouaches to the Jewish Historical Museum of Amsterdam in 1971. Since that time the Museum spreads the Charlotte's art work all over the world. A picture of Charlotte. 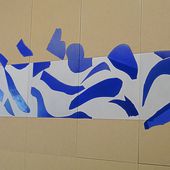