Sand inside my santiag, Maxime Duveau and Jérémie Paul

Exhibition from the 4th of june to the 10th of september at the art gallery Espace A VENDRE, 10 rue Assalit, 06000 Nice, open from tuersday to saturday from 2pm to 7pm, entrance free.

The art gallery Espace A VENDRE exhibites two artists who have followed their artisitical studies at the famous school of arts of Nice the villa Arson. Maxime Duveau likes the United - States of America and also the Rock n Roll music. Showcased for the first time during the exhibition "Odyssey" in 2015 he shoots famous Rock n Roll places and also famous american places. His pictures make with black and white colors seem to be unreal because he takes out during the framing the people and some components. His purpose is to remember us the old time or to wake up some memories. Jérémie Paul is also attracted by the United - States of America but his artistic approach is much more colorful. Ha attracts himself by the faces as an entity associates with the feelings between Pop Art and surrealism. The ballad of Cable Hogue - artetcinemas.over-blog.com 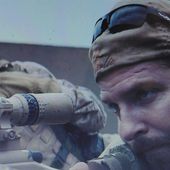