The documentary of the Chad director Mahamat - Saleh Haroun speaks about the tragedy of his own country to 1982 until 1990 towards the Hissène Habré trail. Like it is explained inside a Human Right Watch (HRW) document Hissène Habré is someone violent. In 1974 he kidnaps three Europeans in the desert including the ethnologist Françoise Claustre and he gives the order to execute a french officer in 1975. His soldiers commit also many killings against the civil population in Chad at the beginning of the eighties. For realizing his criminal The action Habré created by decree in 1983 the Direction of Documentation and Security (DDS). With this organism he elaborates a specific repression against his political opponents included the women and the children. After the repression will touche by waves the communities accused of treason (Zaghawa, Hadjeraï). The repression will become much more higher against the Codos (community living in the south of Chad) with kidnappings and killings. The repression system made by Hissène Habré

In spite of the support of France and United States Hissène Habré must leave the power and find a safety place in December 1990 in Dakar (Senegal). Habré thought that he could live there safety like the other African dictators who have succeed to escape before the end of their regime but the falling down of the Berlin wall changes everything. The Senegalese authorities put him under house arrest and charge him for crime against the humanity. Habré will be judge by an African court of justice created by the International court of justice (ICJ). During his trail Habré despises his judges and his lawyers but the testimonies of his victims will help the Court and the 30th of may 2016 he is sentenced to life. This trail constitute a first step but the grounds of the decision didn't mentioned the part playing by France, United States and also by Idriss Déby the Habré's successor. Some African head of state don't like this judgement and they accused the ICJ to be neocolonialist and they have the will to leave the ICJ. 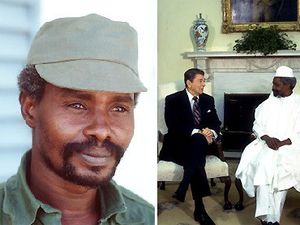