This short movie invokes the interpretation by Billie Holliday of the famous poem written and published in 1937 by Abel Meeropol. Billie Holliday sung with so much intensity the tragedies of the African - American people victims of the lynchings in the deep south to the 19th century until the middle of the 20th century. Today some young girls and boys have been killed by policemen and the justice has founded them not guilty in spite of the evidences. This short movie ask us a single question : does lynchings exist anymore ? 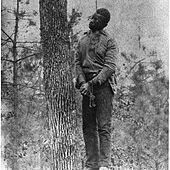