Christo and Jeanne - Claude at the Maeght Foundation The Maeght Foundation at Saint - Paul de Vence tribute the artistic career of Christo and his wife Jeanne - Claude. The couple has packed up the geography and the history. Born the same day (The 13th of June) and the same year (1935) Christo and Jeanne - Claude come from different backgrounds. Christo Vladimirov Jovacheff borns in Bulgaria. His father managed a chemical factory and his mother worked has chief secretary at the Sofia Academy of Fine - Arts. He follows Fine Arts studies but he leaves his country because he rejects the realism socialist (a Marxist Leninist conception of the Fine - Arts). He escapes to Paris where he meets his future wife Jeanne - Claude Denat de Guillebon the daughter of a french general Jacques de Guillebon. Between Christo and Jeanne - Claude the parts are clearly divided : The installations are signed together but Christo draws and Jeanne - Claude leads the organization. Christo and Jeanne - Claude frequent in 1963 the french New Realists and paint some abstract canvas but they aren't satisfy and they decide to live in New York City for developing their own style. They use the artistic performance for creating. Christo and Jeanne - Claude choose a big size monument, edifice or landscape because they are attracted by symbolic aspect of that place (the structure, the usage and the beauty). They pack it up with some colorful fabrics or cloths make some pictures and destroy it after. Christo and Jeanne - Claude communicate a lot for explaining their projects to the public and the medias or selling the pictures of their installations. It helps to raise founds for paying the workers who build the installations The Christo and Jeanne - Claude installations deal with the big interrogations who agitate the humanity. It can be a political question like a protestation against the building of the Berlin Wall with "Iron cur." (1967) made with petroleum barrels. The installation "Running Fence" (1976) made with a ribbon of nylon cloth on 40 kilometers show us the absurdity of the borders. Christo will come back to Paris in 1985 for wrapping up with an ocher and yellow polyester the famous Pont Neuf. This Paris oldest bridge has inspired many artists and Christo has discovered it after his escape from the communist world. The political symbol can be find again when Christo and Jeanne - Claude pack up the German Reichstag (Bundestag) with polypropylene cover with aluminium in spite of the German chancellor Kohl vehement reaction. The Christo and Jeanne - Claude installations deal also with the ecological worries. "The Surrounded Islands" installation (1980 - 1983) encircle several islands in Florida near Miami. Made with pink polypropylene (color of pleasure and lust) this installation denounces the pollution of these islands involved by the economic activity. The Central Park in New York City has hosted some doors dressed with red cloth ("The Gates", 2005) for celebrating the same idea. "The floating piers" installation (2014 - 2016) celebrates the beauty of the nature. A foot bridge (16 meters wide, 3 kilometers length) made with floating boxes of polyethylene connects the city of Solzano (Italy) to the islands of San Paolo and Monte Island. This floating bridge gives a strange sensation to the spectators because they think that they can walk on the sea. 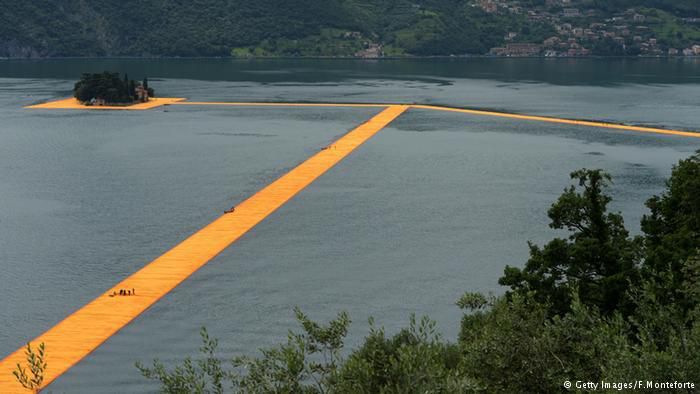 Since the Jeanne - Claude death (2009) Christo develop a new artistic project "The Mastaba". He begins to think about it in 1967 when he denounces the wall of Berlin. The project is inspired by the benches made with mud in front of Mesopotamian houses 7000 years ago for giving the opportunity to the travelers to lay themselves. In 1968 he made a small Mastaba for the Philadelphia Institute of Contemporary Art. He wanted to realize other Mastabas in Houston and in Holland but he decided to let down these buildings. In 1979 the french foreign minister invites Christo and Jeanne - Claude to travel with him to Abu Dhabi. The both artists decide to start again the project and to build a Mastaba in an Oasis inside the desert. The small Mastaba installed in the Giacometti place at the Maeght Foundation (3 maters high, 17 meters wide, 17 meters length) show us what the future Mastaba could be 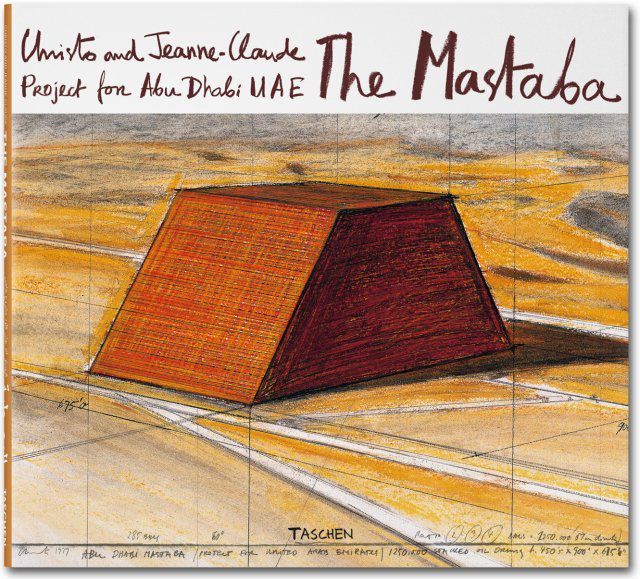 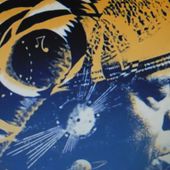 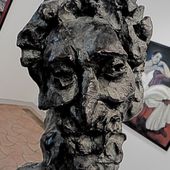