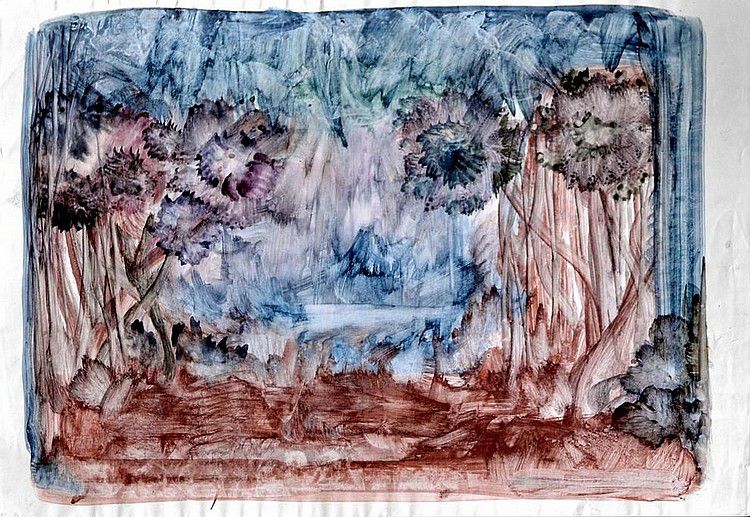 Eugen Gabritschevsky comes from a family who belongs to the Russian Aristocracy. His father was a famous bacteriologist who has worked with Louis Pasteur and also Robert Koch. His scientific works have helped to find a vaccine against the scarlet fever. Gabritschevsky grows up inside an intellectual background because his family receive famous intellectuals like the Russian writer Tolstoï. Gabritschevsky travels a lot (Britain, Sweden, Norway) and he follows scientific studies in etymology. He studies heredity and will help to build a theory about that problem.

In 1929 he becomes to feel himself mentally ill. A problematic love affair with an American girl, the violence involved by the Russian revolution of October 1917 and the death of his mother produce a beginning of schizophrenia. This schizophrenia will destroy his mind but it clenches also an artistic process. The Gabritschevsky brother Georges meets Jean Dubuffet the theorist of the Raw art and he shows him his brother paintings. Dubuffet buys some canvas and incites the gallery owner Alphonse Chave to do the same. In a letter written in 1962 Gabritschevsky explains to Chave that he only paints "visionary sky lines" and "fantastic theaters". Before he painted for his pleasure now he has develop his own technical. He spreads on a paper many colors with his hands, with a brush, with a rag or a sponge for underlining some forms then he takes a brush for finishing his canvas. The Gabritschevsky career follows two periods. The first period begins in the 1930's until the 1950's. He painted some twilight with dark colors and clear supports.

This first period ended in 1958 because he feels better for a few time. The second period begins at the end of the 1950's until his death. Gabritschevsky uses only specific topics in his paintings during that time. He paints faun and flora (butterflies, rapacious, rivers) and female silhouettes (frightened women, ...). His last painting in the 1970's shows ugly individuals, ghosts individuals and hydrocephalous individuals. May be Gabritschevsky interrogated himself about the future of the human being ?