Bonnard in all intimity The Bonnard Museum proposes to discover the inspirations of the Bonnard's paintings towards the prism of the intimity. Sixty paintings exhibit in the three floors convey the visitor inside the city of Paris at the Belle Epoque (1875 - 1914) and show us also the painter models and the landscapes. Pierre Bonnard observes with acuity the life of the people of that time characterizes by carelessness on the avenues, in the capitals, in art galleries and also in concerts because people believe in progress. During that time Pierre Bonnard founds with Paul Sérusier the Nabi movement. They reject the realism and try to find the holly spirit of painting with the help of far eastern philosophies. Bonnard knows as "the japonard Nabi" doesn't hesitate to translate this art in the publicity. The female figure plays always an important part in the Bonnard drawings, the Bonnard paintings and also in the Bonnard photographies. He paints and draws his wife during fifty years  In many times Marthe takes the posture nude without being old. But the Pierre Bonnard private life doesn't turn only around his wife Marthe. A young woman named Renée who is a model exists also. Bonnard loves her but he never wants to let his wife down. Renée understands that and kills herself. Pierre Bonnard will never forget her and he will think all his life that he is guilty of her death. In his paintings Bonnard uses the inner spaces for underlining the beauty of the women. At the end of the exhibition everybody can see that the landscapes play an important part in the Bonnard painting. Each day during his life he interests himself by the weather and his consequences on the light.  These lights changing (sunny, rainy, ...) can be find in the colors using by the painter. Pierre Bonnard has always painted the houses he lived in but his own and last studio "le Bosquet" near his house of le Cannet is a little bit special. This small house appears as being omnipresent inside most of the Bonnard paintings painted in the 20th century until becoming the epicentre of his work. 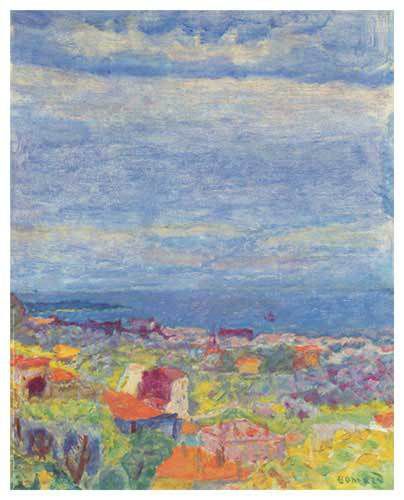