Pascal Pinaud borns in 1964 in Toulouse but he lives and works in Nice. He follows his artistic studies at the Villa Arson and showcases for the first time at the Gallery of the Villa and after begins an international career who will bring him in France and abroad. The Maeght Fondation and the FRAC PACA propose to show us the Pascal Pinaud art work. It gives a huge importance to the diversity and underline it inside the creative process and the materials used. The exhibition begins with the "Tôles" serial where Pascal Pinaud introduces several references to the history of art he mixes to industrial technical. The history of art plays again an  important part in the "Screen" serial specially about the necessity to preserve the creativity. Pascal Pinaud makes also a reference to the underground ("Patères" serial) when he invokes Kazimir Malevitch and the Russian constructivists. The picture influence the Pascal Pinaud work. He interests himself by the perception of his art work by the spectator ("Chocs" serial) and the changings involve by the pictures ("A hundred drawings"). Pascal PInaud creates a dialog between the spectator and his art work who takes back to the fairy - tales ("Fire" serial). The Pascal Pinaud art work introduces some tension when he decides to go out his studio ("Out of the way", "Test'art") but it helps him to find the serenity. Pascal Pinaud uses different kinds of material in his art work. First the photography plays an important part. It can be black and white pictures ("Screen" serial) for giving a most solemn aspect to the topic or colored pictures for underlining the hyper realism of the topic ("Stères de bois" serial) or for putting in evidence all the testing tracks chosen and framed integrate inside the art work. Pascal Pinaud uses also the sculpture like these lacquered panels made with steel by a coach builder and put together (serial "Tôles") or these superposed panels of glass with some other materials from car crashes where artists give another life ("Shock" serial) or at end the three letters shined by 79 bulbs ("PPP" serial). The texture and the drawing figure among the exhibition. Pascal Pinaud recuperate some textures he puts together in a patchwork who invokes the craft men work ("L'arbre à fèves"). The drawings bring a new element of contradiction for inciting a reaction ("Les Semences" serial). 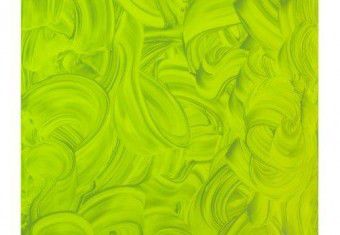