"Lucia" seems forty years after his first screening to be become the most emblematic movie of the Cuban movies and the Cuban Motion Picture industry. When Castro and his partisans take the power the Cuban film industry doesn't exist.The culture was divided in two parts : the first was an elitist part and the other was a most popular part influenced by Europe and also United - States. "Lucia" shows that it is possible to create a Motion Picture Industry by invoking his own history. The state of the negative conservation was critical but with the support and the help of some institutions (Cineteca di Bologna, Immagine Ritrova Laboratory, ICAIC, Turner Classic Movies, The Film Foundation World Cinema Project, Bundesarchiv - Filmarchiv, BFI National Archive) the movie has been restored. 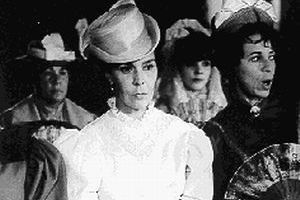 "Lucia" shows us the Cuban history in three main periods of time. At the end of the 19th century (1895) Lucia was an aristocrat who falls in love with a married American. She thinks that this man will marry her but when she knows the truth she will leave her mind. The second period of time happens during the 1930's (1932). The Americans have taken the control of Cuba and they impose corrupted and bloody dictators. The Lucia husband wants to make politics but he his killed by soldiers of the Machado dictator. Lucia will become a courageous mother who must fight against the adversity. In the last period of time (196...) Lucia works as farmer and falls in love with a jealous truck driver. This period of time glorify the Castro regime and Lucia fights for her rights but she doesn't want to leave her lover. Short movie, documentary, directed by : Isabal Fromme, Valentin Hemans, produced by : Louisa Ramos, (Brazil), 17 mn, (2016). The film director gives the invitation to go in the house of a woman ...