Matisse and Vence, the pure emotion During the winter 1916 / 1917 Henri Matisse arrives on the French Riviera. Seduced by the beauty of the landscape he goes to Cagnes - sur - Mer for visiting the famous painter Renoir and for meeting one of the Renoir disciples Yoshio Aeyoma. Henri Matisse lives definitively in the French Riviera in 1939 but he has an operation in 1941 and the doctors say that he must stay in bed an wear a surgical corset. During that period he draws with pencils and charcoal. He uses also cut gouaches and asks to his models to wear the clothes he has taken back with him from his travels. Models of the Matisse chapel and Henri Matisse working with cut gouaches.

For recovering the health after his surgery Henri Matisse decides to live in Vence and he looks for a nurse for curing him and for cooking. Finally he meets a young woman Marie Bourgeois who loves art and who want to become a model. After three years Henri Matisse chooses to go to Nice and the World War II events for him (his wife and his daughter send to a concentration camp and his son who belongs to the French resistance) will remove him from Monique. Inside his studio room at the Regina Hotel Henri Matisse doesn't paint anything he just gives orders to his assistants to stick cut gouaches papers on canvas. Henri Matisse meets again Monique Bourgeois in 1948 but she is becoming sister Jeanne - Marie and she lives in a convent. Sister Jeanne - Marie has an aim she wants to rebuild the old chapel near the convent and she needs to have the Matisse help for making that. As a christian Henri Matisse agrees and he supports all the process. He initiates himself to all the technical except painting. During four years Henri Matisse will follow the steps and will ask to the photographers to shout him and his art work. When the Chapel is inaugurated in 1951 Henri Matisse wasn't there because he felt sick. Three years later he dies. Inside the chapel Matisse 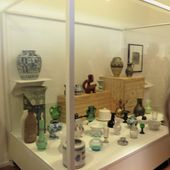