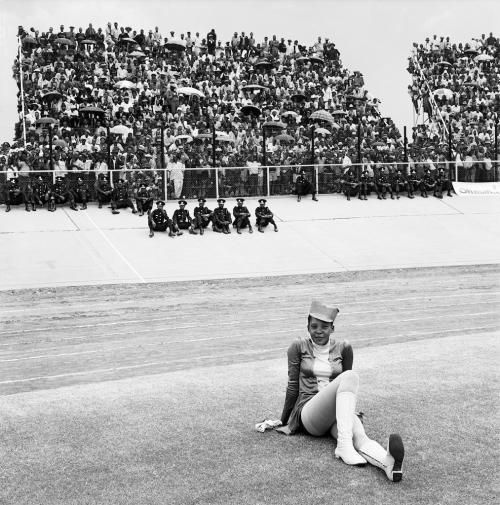 Disciple from Dorothea Lange, Walter Ewans, August Siders and Eugen Atget the South - African photographer David Goldblatt succeeds to catch the complexity and the ambiguity of the relationships of his country. Towards his pictures he speaks about the South - African history and geography. These pictures show us also the respect he improves for the people (Black and White) he photographs. At last these pictures underline the tensions, the relationships and sometimes the friendship between the communities. For David Goldblatt the photography isn't a weapon or a propaganda tool but his position has aroused a lack of understanding specially during the apartheid regime. David Goldblatt begins his career in 1948 when he becomes press photographer. He sees the building of the evil apartheid regime and he decides to use his own camera for photographing the different components of this regime.like a documentary. David Goldblatt visit the white and racists Afrikaners Dutch settlers descending who live in clean suburbs. He succeeds also to win the trust of the black people who live in relegated areas and shoots their way of living in the "On the mine" serial. This photography serial show us a way of living near slavery with many brutality against the people. David Goldblatt interests also himself a lot with the structures who are what human being is available to build and who result from cultural and political choices. These structures play a important part for understanding a system. For example in the relegated areas black people should wait many hours before taking a bus for going to work or people (Black and White) should live in separated areas. The end of apartheid regime has aroused many hopes but the hurts aren't completely cured. In 2015 and 2016 many demonstrations has happened at the Cap Town university. The students wanted to break down the statue of the Brit settler Cecil Rhodes but they have also destroy some Molly Blackburn pictures who was a famous apartheid opponent.