From the chapel to the museum, the creation of the biblical message The Marc Chagall's art work follows a double way after World War II. Imminent members of clergy wanted to give a new importance to church and some artists tried to integrate a peaceful message inside their art. Henri Matisse sets the inside of the Rosaire chapel and draws the furniture and the liturgical wardrobes. Picasso transforms The Roman Vallauris chapel in a temple dedicate to peace with "War and Peace" (1952). Living in Vence since 1949 Marc Chagall has already participated to the set of the Notre Dame de toute grâces church and he envisages to build a place dedicate to contemplation who will be the link between picture and architecture. Chagall chooses the major chapel of the Christ's martyrdom in Vence. Marc Chagall has always improved a deep feeling with religion. He has grew up in a jew Hassidic family and his first paintings reflect the bible influence. In 1931 he will accomplish a travel to Palestine and he will be deeply touch by this area. For the major chapel three topics are kept : the man in front of his god (nave), the canticles (sacristy) and the actual human being destiny. These masterpieces must be install by respecting the opposition principles but this project will fall down for two reasons. The French state accepts to pay the artist and the city of Vence should restore the chapels but who will be the owner of the paintings ? After the discovery of human size sculptures made in the 18th century representing the Christ's martyrdom some local personalities refuse the statues transfer or their cohabitation among the Chagall's paintings. The statues inside the major chapel representing the Christ's martyrdom

The determination of these personalities will kill the project and Chagall will only be authorized to make a mosaic named "Moïse sauvé des eaux"and install inside the Vence church in 1979. The major chapel statues will be in the listed building in 1958 but the major chapel and the statues are since that time forgotten. Marc Chagall stayed determinate to realize his project and he will do alone he sketches and the paintings inside his Vence studio between 1956 and 1966. When André Malraux becomes the French culture minister at the beginning of the 1960's he develops a politic who integrate modern art inside historical monuments. Malraux signs a contract with Chagall in which Chagall gives all the paintings and the sketches to a museum supported by Malraux. 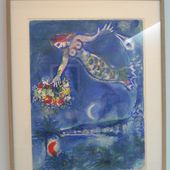 Marc Chagall, the Song of Songs, the color revealed - artetcinemas.over-blog.com

Exhibition at the National Museum Marc Chagall, avenue du docteur Ménard, 06000 Nice, open everyday except Thursdays, from 10am to 7pm, fee : 10 €. Marc Chagall inspires himself by the Song of S...