The David Shulman documentary follows those who have been already done about the "radiant child" like "Downtown 81" from Edo Bertoglio or "Basquiat" (1996) from Julian Schnabel but it distinguishes itself from the others by giving the speech to the Basquiat neighborhood. This neighborhood helps us to understand better the Basquiat story from September 1968 when Basquiat receives the "Grey Anatomy" book by his mother to his death in August 1988. This documentary doesn't speaks a lot about the conflict between Basquiat and his father because it concentrates to the first graffiti made by the artist with Al Diaz in downtown Manhattan under the name SAMO (same old shit). This collaboration with Diaz has begun at the Saint Ann school and will be ended when Basquiat will be invited in TV shows. The crossroad between the graffiti world to the art world is materialized by the new signature "SAMO is dead" and at the same time Basquiat begins to frequent all the New - York museums and builds himself a world based on African - American heroes images or fighting with the purpose to underline their personalities or their fighting. He paints on old Manhattan wood doors buildings and attract also himself with sticking. Basquiat meets also art merchant and art galleries owners and must compose with their different personalities. So this documentary accuses Annina Nosei to have closed Basquiat in a cellar and highlights the part playing by Bruno Bischofberger and Larry Gagosian in helping the artist for working or for fighting against his drug addiction or Mary Boone who makes Basquiat rich. But the death of Andy Warhol the Basquiat's mentor and his drug addiction will kill him when he began to give a new direction to his art. Jean - Michel Basquiat inside his own studio. 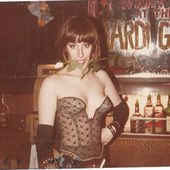