Berlin 1885, the division of Africa November 15 1884 the most powerful man in Europe the German chancelor Bismarck gathers a conference in Berlin for sharing Africa among the most important european countries. February 26 1885 an agreement accepted by all fixes the borders for ever. The Europeans leaded two purposes : taking the more territories they can for being more rich and protect themselves against America and Russia the future powerful countries. The most important point between the members of the conference was the Congo basin because it gives an access to the heart of Africa. For succeeding the members don't hesitate to use all the means. The king of Belgium Leopold II gives money to the American explorer Stanley for influencing the works and like the others forces the African traditional chief to sign unequal treaties for tacking their lands. Any African participates to the conference and the European members know anything about Africa. Since the beginning of the conference the members tell some speeches about freedom but in fact during that time racists theories based on skulls studies and a pseudo - hierarchical organization between the races increase highly in Europe. The members follow that opinion by comparing the Africans as drunkers. The agreement adopted in February 1885 seems to be anodyne but the article 35 introduces the effective occupation idea. It means that a country can take a land by putting a flag in the ground. The African people look borders as places for meeting or trading but the European colonialists specially king Leopold II of Belgium will transform borders as prison walls and after as hell for the Africans. 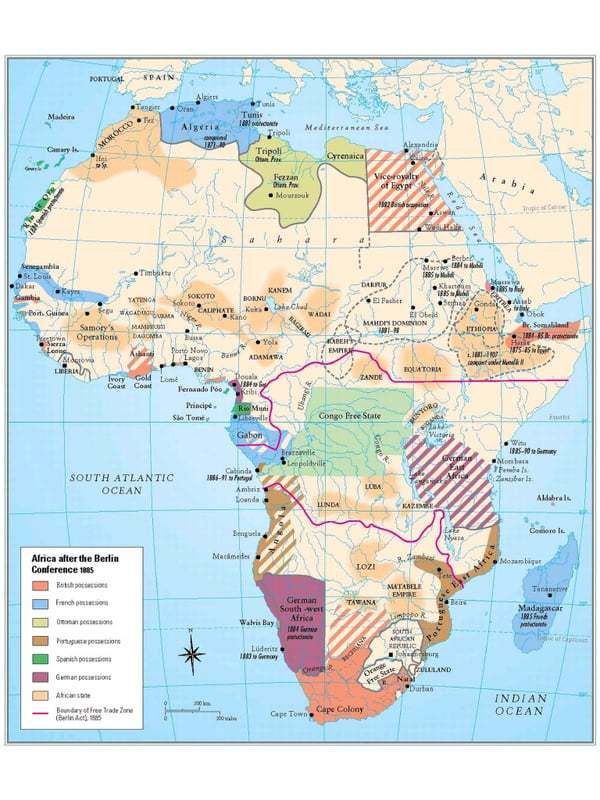 The Africa after the Berlin conference (1885)