At the ending of the 1950's Hal Ashby arrives at Hollywood where he begins a career as film editor. There he works in two movies "In the heat of the night" (1967) and "The Thomas Crown affair" (1968) with the film director Norman Jewison and is awarded for the first as best film editor. In 1970 the parts are switched because Jewison produces the first Ashby movie named "The landlord". Elgar a young man belongs to an upper class and eccentric family. He decides to buy a building near Park Slope (Brooklyn, New - York city) with the aim to pull it down for making something more luxury but on place he wants to restore it after meeting the poor black tenants workers. Among them he speaks with the elder a woman named Marge and also a girl named Fanny whose husband is a little bit nervous. During a lunch with his parents Elgar rebels himself against his parents values and leaves the house. Walking alone in the streets he goes into a whisky bar for having  a drink and falls in love with a mixed race dancing girl named Lanie. When Elgar wants to introduce Lanie to his parents they don't have a good reaction. Hal Ashby analyzes with accuity the 1970 American society divided by the post flower power generation and the trauma of the Vietnam war but will stay out of the Hollywood motion picture industry because the moghuls estimated that he was a liberal. Now everybody think that he is a potent member of the Hollywood golden age the New Hollywood. The film critics like "The landlord" but the audience don't like it much in spite of the fact that two film actresses Lee Grant and Diana Sands have been nominated as best actresses in several awards ceremonies (Academy, Golden Globes, BAFTA, Laurel) during 1971. 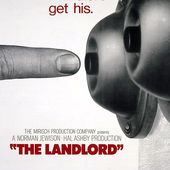 Directed by Hal Ashby. With Beau Bridges, Lee Grant, Diana Sands, Pearl Bailey. At the age of twenty-nine, Elgar Enders "runs away" from home. This running away consists of buying a building in a ...