In Autumn 1944 forces composed only by white soldiers are susbtituded to the colonial troups who have landed two months ago in South of France. These forces will fight and also will be celebrated after the winning on fascists. This subsitution is the wish of the american general Walter B Smith who required that the segregation inside the american army is extend to all of the allied forces. The général de Gaulle follows that wish because he needed the help of the american logistics and also because he wanted to control better the underground forces. All the colonial forces were put together near the Toulon harbor and send back by boat to the Thiaroye camp in Senegal. These soldiers needed to receive their pay but the general who leads the camp decided to divide it by two. Angry by this decision the soldiers succeed to hold the général until he swears to give their money back but he doesn't respect his swearing. Early in the morning with the agreement of the politicians some armored cars shot the soldiers. The film director Ousman Sembene remembers himslef his exprerience as soldier from colonial troups for building the script based on three different personalities : the African sergeant Diatto a cultured man, the racist captain Labrosse and the humanist captain Raymond. The Ousman Sembene movie receives a special award at the Venice Mostra but it will be censored ten years (1988 - 1998) in France. Bodies of soldiers after the shooting. 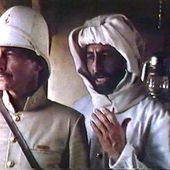 Westermarck Effect
R
Richard Murray
06/11/2019 20:26
great post PHillipe, in the usa, veterans day is coming up and this movie warrant a viewing
Répondre