Each summer time the Nice Archaeological Museum launches many conferences introducing among the people the museum works on the Roman city of Camenelum (Cimiez). Build after the conquest of Gaul by the Romans (in 122 - 144 BC) Camenelum was the Roman province capitale of the Alpae - Maritimae (Alpes - Maritimes). Served by the Via Julia Augusta who went until the Narbonnaise Gaul the city owns an amphitheater with 5.000 sits, three thermaes and between 1.000 and 1.500 soldiers. With the rising of the Roman conquest until the north of Gaul the city of Camenelum leaves his status as capitale. The barbarians invasions of the Roman empire in the fourth century will be the beginning of the end for Camenelum but people will live there until the eight century. An archaeological museum will be open at the beginning of the 1960's by agreement of the local and national political leaders and transfered in a modern building near the vestiges in 1989. Many Roman pieces highlight in come from excavations or searches in the vestiges. Exhibition at the Archeological Museum of Nice Cimiez, 160 avenue des Arènes de Cimiez, 06000 Nice The pieces of the exhibition "Dreams from Greece" come from the Campana marquis and also the ... 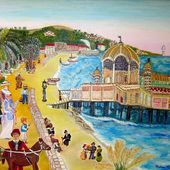