In the Roman mythology Tellus represents a goddess the earth always associated with Jupiter (the father). She means mother earth like a woman with several children around her. The Tellus exhibition at the Carros CIAC tributes this goddess because the exhibited artists (Jacques Godard, Hala Hilimi Hodeib and Roland Kraus) show us all her diversity meaning her richesness. Jacques Godard interst himself highly with Tellus when he discovers for the first time the Maures mountains in the South of France. It arouses him to invent a pixoplastie way of making by distroying pictures for giving pixels and building a new world. Hala Hilimi Hodeib invite us to know the dead sea environment (Palestine). This primitive and  peaceful universe looks like light. Her work highlights lines until the skyline for building natural abstractions. Roland Kraus follows the goal to depict Tellus. His way of making introduces it as a frightened hole discribing by myths but also available to welcome and to fight against with success against our own fears. 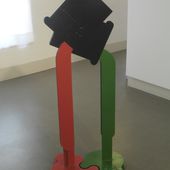 the two contractors watch of art Yves Bremont and Philippe Biscroma, exhibition at the CIAC, Carros castle, castle square, 06510 Carros (village), closed Mondays and hollidays, open from 10am to ...