"Soul" should be projected during the last Cannes Film Festival and own an award but the Covid has broken that way of thinking. Joe a music teacher follows the goal becoming a famous jazz musician but his daily life is limited teaching music to students playing well or not music. The destiny will take another decision because Joe will find himself inside a world where souls must build their personalities. He will meet 22 souls and together they live adventures changing deeply their minds. The "Soul" directors and script writers Pete Docter and Kemp Powers look for the same existing quest. Many run for goals but few understand that improvisation plays an important part in living. Jazz music helps knowing better that point of view. It gives a huge importance to improvisation, energy and hazard and also the musicians must listen to each others for performing. We must also underline the graphism of this movie and the strength of drawings until the single line. 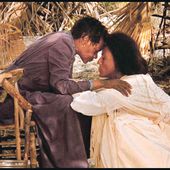 Daughters of the dust - artetcinemas.over-blog.com