Introduced during the last Cannes Film Festival the Saara Lamberg's movie "Westermarck Effect" deals with a delicate topic the genetic sexual attraction. The attention of the film director has been caught when she has ridden several articles in some papers like "The Guardian" speaking about same stories in all of the continents including the last in United States where people could be put in jail. The genetic sexual attraction appears in Antiquity with the love affair between Jupiter and his sister Juno. The Romans and the church reject such attitude but it will continue in a small size until now. The young Sam is an adopted kid after being abandoned by his mother twenty years ago. He lives in ugly places and doesn't succeed to build something. One day he meets Sally an older woman than him and follow her until her rich - looking home. Sally is more stable than the other girls he meets and he decides to build a serious relationship with her but she refuses saying she is his mother. This confession disturbs Sam but arouses him meeting Sally again for knowing better his own history. Sam and Sally find them again spending good time and celebrating Sam's birthday until the time they make love together.

Saara Lamberg will also introduce the Oedipe complex theorized by Freud meaning that Oedipe kills his father Laïos the Thèbes king and fall in love with his mother Jocaste for the script. She invents another character Dan the Sam's father who will be happy to meet him again before rejecting him when he discovers the incest and finally congratulates him during the birth of the Sam and Sally baby. Saara Lamberg doesn't hesitate to involve herself in cleaving movies like the genetic sexual attraction concept created during the 1990's by Barbara Gonyo in "Genetic sexual attraction, forbidden love" (1991). It deals with intimate relationships between people belonging to the same genetic patrimony during late meetings after a very long separation. Other writers like Amanda Marcotte on her blog make the critic of this concept estimating that it supports incest building their writings on Freud and Westermarck works. Freud shows that societies and laws sentence such attitude and Westermarck prove that people look for someone out of his background for having a baby. Inside the Saara Lamberg's movie nobody make the critics of the genetic sexual attraction and it seems out of time. Of course the main actors (Saara Lamberg and Jayden Denke) involve themselves a lot and the movie is well directed but many question happen. What will be the Sam and Sally baby story ? Genetically Sam is father but also brother and Sally is mother and also grandmother. What will the part playing by Dan the Sam's father ? Does this baby be protected from blood relations diseases. 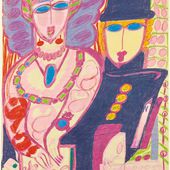 The painter Aloïse Corbaz is a potent character of the raw art making with a career all over the 20th century. Born in 1886 she succeeds to become member of the German emperor Guillaume the second...